I hope everyone enjoyed a great meal and quality time with loved ones today. We were supposed to go out of town for a dog event in New Jersey, but then my roommate thought she had to work Saturday, and I didn't want to drive all that way by myself, so we didn't end up going. We did have an invite to a friend's house, but we just decided to stay home and make our own feast. 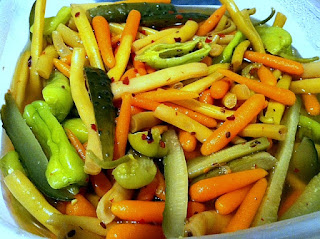 Of course, I had to carry on the tradition of the Thanksgiving pickle bucket (which usually lasts until the New Year). It had only my favorites this year: dill pickles sliced into thin spears, baby carrots, yellow wax beans, and pepperoncini cut in half. Everything was homemade except the peppers. YUM! 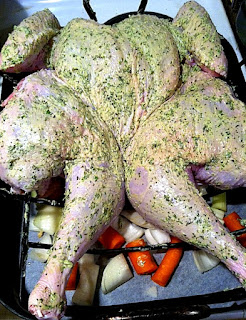 As for the turkey, I tried something that I have been thinking about doing for years--spatchcocking the bird (or butterflying, which is much less fun to say), rubbing it underneath and over the skin with an herbed compound butter (can you believe that I still have fresh herbs--parsley, sage, thyme, and oregano from my garden in late November?!), and roasting first at a high temperature--450 for 30 minutes--and then lowering it for the remainder of the cook time, about two hours at 350. Turned out FANTASTIC--flavorful and perfectly moist in only 2 1/2 hours for a 14-pound hen! 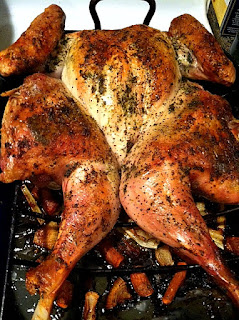 And the process of spatchcocking was easier than I anticipated: You just use strong kitchen shears (and maybe a cleaver) to cut out the backbone, then flip the turkey over and press down with both of your hands until the breastbone breaks. I tucked the wing tips underneath so that they didn't burn, and I roasted it on a rack over some chunks of carrot, celery and onion to give more flavor to the gravy that I would create later.

For my make-ahead sides, I prepared my basic sausage and herb stuffing, and for the first time ever, a green bean casserole! I have actually never made one before because I loathe canned green beans. But I made this with fresh green beans, real mushrooms, and a proper from-scratch cream sauce. I did use the pre-fab French fried onions because, well, I love them! I prefer them to croutons on a salad, in fact. Anyway, I forgot to take a picture of the casserole, but I assure you, it was DELISH! It's going to be a new holiday staple around here.

Preheat the oven to 400 degrees. Bring a gallon of water and 2 tablespoons of salt to a boil in a large stock pot. Add the beans and blanch for 5 minutes. Drain in a colander and immediately plunge the beans into a large bowl of ice water to stop the cooking. Drain and set aside.

Melt the butter in a large skillet set over medium-high heat. Add the diced onions and sliced mushrooms, one teaspoon salt and pepper and cook, stirring occasionally, until the mushrooms begin to give up some of their liquid and the onions are transparent, approximately five minutes. Add the garlic and nutmeg and continue to cook for another 1 to 2 minutes. Sprinkle the flour over the mixture and stir to combine. Cook for one minute. Add the broth and simmer for one minute. Decrease the heat to medium-low and add the half-and-half. Cook until the mixture thickens, stirring occasionally, approximately 6 to 8 minutes.

Remove from the heat and add the green beans. Pour into a 13x9 glass baking dish. Place into the oven and bake until bubbly, approximately 15 minutes. Top with one can of french fried onions and return to the oven for five minutes. Remove and serve immediately.

Besides prepping the dressing and green beans a day ahead, I had to enlist my trusty crock pot in the holiday preparations. I used it to make some excellent garlic mashed potatoes from the Crockin' Girls Fecebook page. I made a few substantive changes, though: butter in place of the olive oil, chicken stock rather than water, plain cream cheese instead of flavored (and only 4 oz.), and buttermilk in place of the milk or cream. Oh, and I peeled my potatoes--personal preference. Definitely a make-again, and not just for special occasions. But this recipe is particularly useful at holiday times when oven space is at a premium. 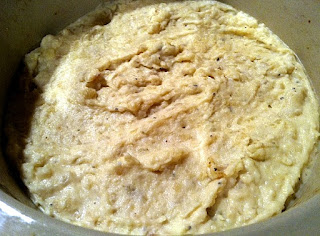 Cut potatoes in large chunks. Place potatoes in the slow cooker. Add garlic, onion, olive oil (or butter), salt and pepper to taste, and water or broth. Mix to coat.

Serve right away, or switch your slow cooker to warm. 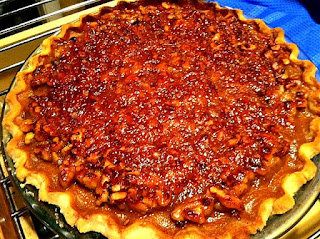 And naturally, I have saved the very best for last. I made the most INCREDIBLE pumpkin pie with a walnut crunch topping that was the 2005 National Pie Championships pumpkin winner. And BOY HOWDY, did it deserve it! Oh, and as a flattering sidebar, if you are into the pie championships (as aired annually on the Food Network), I am unabashedly delighted to report that TWO past winners were kind enough to comment on the beauty of my pie when I posted this picture to Facebook. I know...I'm such a foodie geek! 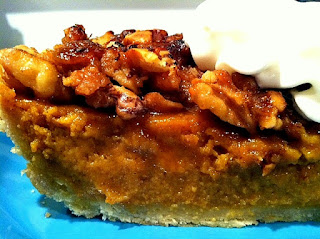 In a food processor, add flour and salt. Pulse to mix. Add cold butter and shortening, which has been cut into small pieces. Pulse 6 to 8 times until mixture resembles coarse meal with some small pea-size butter lumps. Drizzle 4 tablespoons ice water evenly over and pulse 3-4 times more until dough holds together. Add more water, 1 tablespoon at a time until dough holds together. Form into 2 balls, and then flatten each into a disk. Wrap disks separately in plastic wrap and refrigerate at least 1 hour.

In a small saucepan, over low heat, melt butter. Stir in walnuts and brown sugar and mix until well mixed. Spoon evenly over pie. Broil pie 3 minutes, 5 to 7 inches from broiler, or until topping is golden and sugar dissolves. Cool pie again on wire rack.

In a small bowl, beat heavy whipping cream and powdered sugar with electric mixer until stiff peaks form. Pipe around edge of cooled pie. (I skipped this part and served mine with Breyer's Natural Vanilla Bean Ice Cream!)