Who haven't heard of the famous Penang Curry Mee of Lorong Seratus Tahun (LST) with its humble beginnings as a hawker stall in Penang, right?  For KLites who never got to taste the original in Penang or want a taste of that curry mee, they've a few outlets here in Klang Valley. 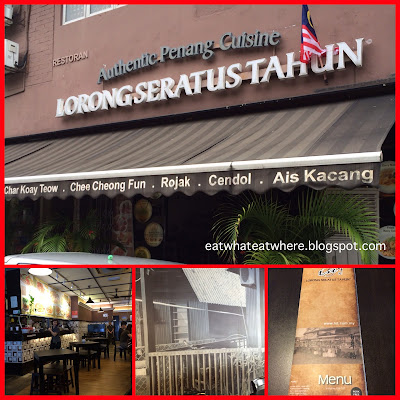 Although I'm aware that they've been in KL for quite a few years now, I never went to try it until recently.  So, on a Sunday morning, we finally made our way to Restoran Lorong Seratus Tahun @ SS2 PJ.  The outlets here don't just sell Penang curry mee, they have a host of other (supposedly) authentic Penang cuisine to offer as well. 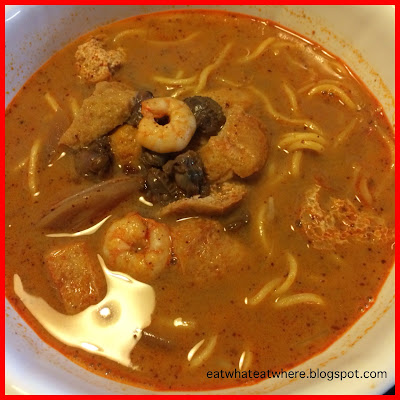 Of course, the first thing I wanted was the LST Curry Mee (+ Meehoon) @ RM9.90 which came with prawns, cuttlefish, "see hum" (blood cockles) and "tau fu pok" (bean curd puffs).  Portion wise, it was quite a generous bowl of noodles and would certainly make a fulfilling meal. 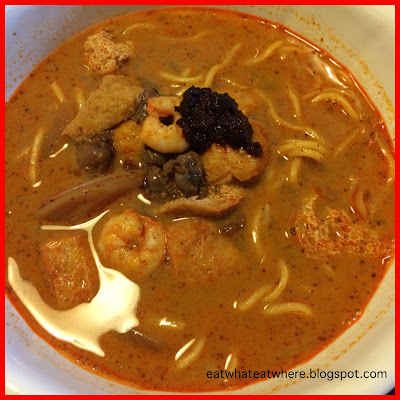 Since this is Penang-style curry mee, you'd expect the broth to be thin and light in coconut milk with a slight seafood sweetness (not the creamy laksa with savoury chicken broth variant of our KL ones).  On its own, it won't do anything for you...you have to add on the homemade chilli paste to give the broth the extra oomph!  The chilli paste here is very dark (almost black) in colour, so I added in a bit just to gauge the spiciness level (what you see in the picture is just 1/3 of what I ended up putting in). 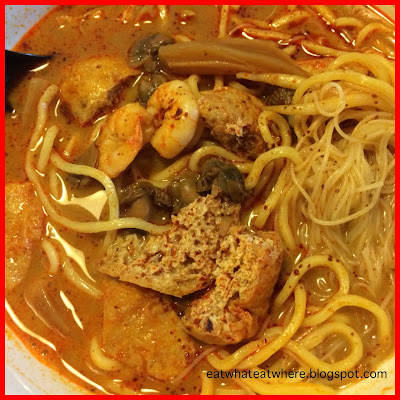 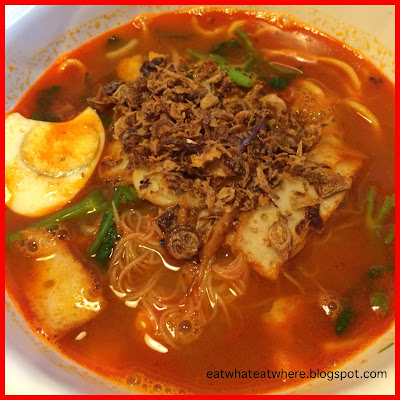 My mother-in-law had the Prawn Mee (+ Meehoon) @ RM9.90 which contained prawns, fish cake slices, hard boiled egg, bean sprouts, kangkung and fried shallots.  She seemed to like it.  I had a taste of it and thought it was alright since it was predominantly a seafood broth (can't ask for too much when the soup is not made with pork bones).  The broth was slightly sweet coz she didn't spice it up with the chilli paste provided.  But, then again, there's plenty of other better prawn mee out there. Some Penang favourites they offer include Assam Laksa, Fried Koay Teow, Koay Teow Th'ng (Soup), Fried Chee Cheong Fun, Nyonya Laksa, Fried Mee Mamak, Rojak, Otak-Otak, Pie Tee and many others. 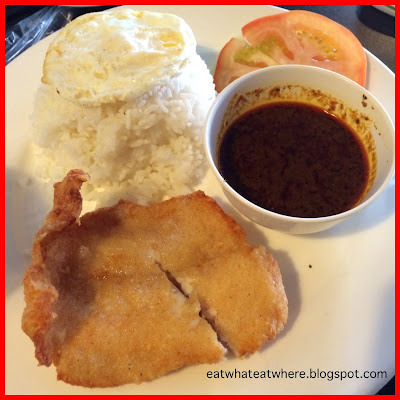 My son went with the Sambal Fish Rice @ R12.90, a simple dish of plain rice with a piece of fried fish, egg and sambal.  I don't know what fish that was (probably frozen dory) but, at least, the fish didn't taste fishy or stale.  I did enjoy the sambal which had a predominant fragrant kaffir lime leaf taste. 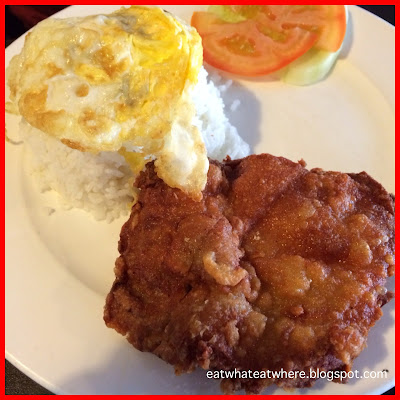 My husband had the Sambal Chicken Chop Rice @ RM12.90 which was exactly the same as the previous dish (sambal bowl not in the pic) except for the piece of fried chicken.  The fried chicken was decent, fragrant and crispy on the outside and still fairly tender on the inside. 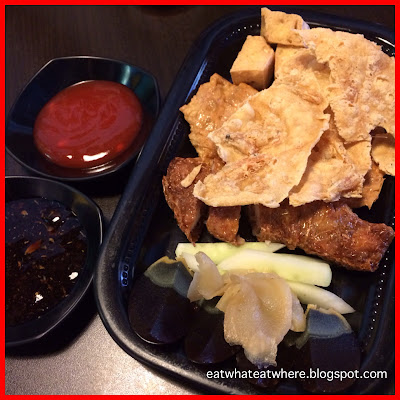 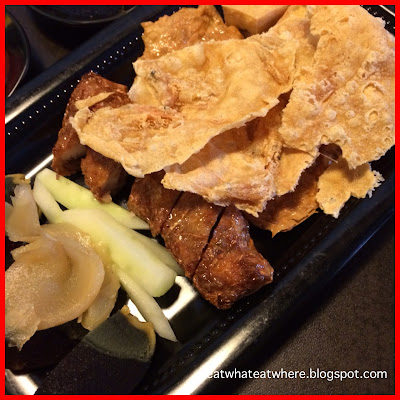 The lor bak wasn't too greasy but, what can I say, it's chicken lor bak...it'll never be as good as those made with minced pork.  As for the century eggs (which we both love to eat), let's say it wasn't the creamiest I've eaten and they were quite stingy with the pickled ginger too.  My mother-in-law was kind enough to leave me two pieces of the century egg....but without any ginger! ;D 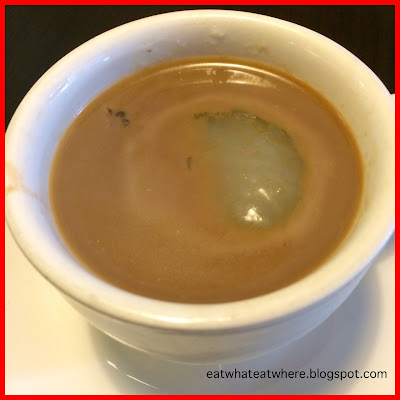 I also ordered the Sago Gula Melaka @ RM5.90 and it arrived with the gula melaka already poured in.  In this day and age when all of us have a different sweet tolerance level, I would have thought that they would be smart enough to serve it separately.  If you're not diabetic yet, eating this may turn you into one instantly! 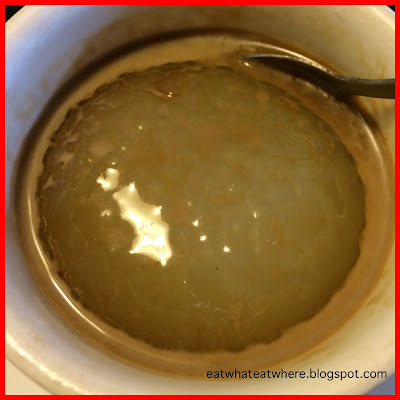 Not only was it insanely sweet, the sago pearls were cooked until they were an overly soft and mushy blob.  My spouse had to painstakingly finish this one for me. My Personal Opinion The food here wouldn't impress a Penangite....in fact, it wouldn't even impress a non-Penangite like me.  The food is tolerable at best but I suppose I can give some leeway since it's pork-free (or maybe that's why, since it went pork-free, it doesn't taste as good?).  But the place do have its customers, like someone said...you just need to let them think that the food is from Penang and they'll go gaga over it.

I recently saw this place nominated on Time Out KL Food Awards 2015 for Best Char Kway Teow but I didn't try this dish when I was here, so I don't know if it was any good but, judging from the other food I had here, this would probably be an 'insane' choice! As I've never eaten the original Lorong Seratus Tahun Penang Curry Mee, I don't know how this one compares.  Let's just say I won't be rushing back anytime soon! Restoran Lorong Seratus TahunNo 56 Jalan SS2/6647300 Petaling JayaSelangorTel: 03-7865 8577